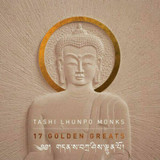 "17 Golden Greats" features ten tracks compiled from albums the monks have released over the past decade, along with seven new recordings - with two prayers composed by the HH the 14th Dalai Lama: "Prayer for the 17 Masters", paying homage to the 17 Pandits of Nalanda (the ancestral home of Buddhism in India) and "The prayer of the words of truth", written in response to the Chinese occupation of Tibet.

No reviews.
Leave a Review